A Brief History of Software as a Service (SaaS)

Software as a Service is a means of application delivery where your application does not reside on your computer but is hosted on another computer. The application (and even your data) is transferred over a network connection. Since most SaaS arrangements are conducted over an Internet connection, SaaS is increasingly becoming known as "cloud computing". ("Cloud" comes from use of a cloud icon to represent the Internet in network diagrams.)

An Establish Model with a 40-Year Pedigree

Although SaaS is touted as a new way of delivering applications, SaaS has been an established business model since the 1960s when it was called a "time sharing system". In the time-sharing model, several "dumb" terminals (keyboards and monitors lacking CPUs) were networked to a mainframe or mini-computer, usually in a hub-and-spoke topology. Applications and data resided on the mainframe. Input was received via the terminal keyboard and output was then directed to the appropriate terminal monitor. 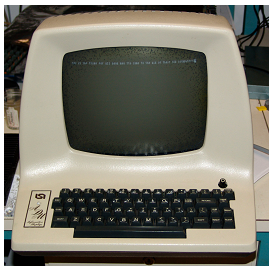 Larger companies, universities, and government organizations would have one or more in-house computer hubs servicing the dumb terminal (also known as "thin clients") spokes. The costs of computer hardware, software, support, and training were generally well beyond the reach of small- and medium-sized enterprises (SME) throughout the 1970s and early 1980s so many companies found it cost effective to lease time-sharing services from third parties.

CRM, payroll and accounting services were, and still are, one of the key software products delivered as a service to SMEs. Data transmission was generally conducted over a dedicated phone line and modem. The applications used simple text based interfaces and rarely required the input and transmission of large amounts of data.

In the 1980s and 1990s the cost of computer hardware came down tremendously, allowing every worker to have access to his/her own computer. Desktop computers hosted their own applications. SMEs usually bought off-the-shelf, shrink-wrapped software. The hub-and-spoke topology of the time-sharing system remained, however, in the form of Local Area Networks (LAN). While applications were hosted on local machines, critical business data were kept on a central server.

The network manager position was created to oversee the operation of the LAN, ensure timely backups of critical business data, maintain desktop hardware, and install and update new software and hardware. In SME environments, LAN managers were frequently pressed into service training employees on the use of hardware and software. LANs proved to be a major cost center for SMEs and SMEs rarely budgeted to provide a LAN manager a luxury of time and money. Consequently the LAN manager position was a busy, stressful job and LAN managers were poorly resourced to train less computer-literate staff.

SaaS Returned in Response to "Bloatware"

The size of applications and the amount of data applications had to deliver in real time became too much for phone/modem connections. "Bloatware" became a common complaint among users of packaged software in the mid-1990s.

Ever ballooning applications were competing for space on harddrives. In the 1990s harddrives were small and expensive and upgrading to a larger drive to handle bloatware was not an option. To overcome bloatware, many businesses again turned to SaaS's hub-and-spoke model for software deployment. 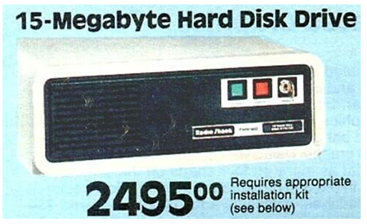 This would hold less than four MP3 songs today

A network version of the application was stored on the hub and users were able to use their workstations to access the networked application. The system required additional skills and responsibilities from the LAN department. While larger companies could make an easy business case for the deployment, SMEs found the system cost prohibitive.

With fast broadband connections being as ubiquitous as a phone or fax machine in the modern SME office, SaaS has once again returned as a viable model for application delivery and data management. In times past, the case for SaaS had always been lowered hardware and storage costs.