Anyway, welcome. Stick around this time.

Many will not forget Google Buzz (which a friend described once as "everything you read on Twitter but 8 hours later") and Google Wave ("These little controls roll up and down nicely but what am I supposed to do with this exactly?"). Few remember Google's first social network outing called Orkut. Orkut was Google's response to MySpace. The service never really caught on in North America but found a level of critical mass in Brazil and India. Not nations with small populations, those. 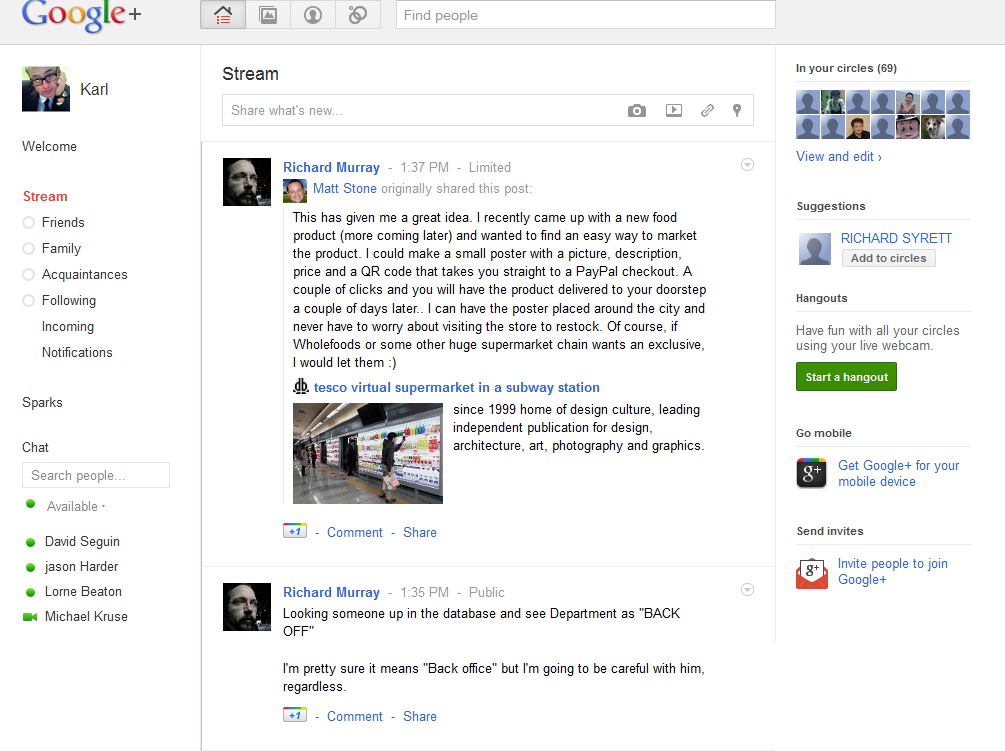 Google is back with a fourth kick at the North American social networking can. This time it's Google+. Google+ is a Facebook clone with a few interesting features. Many people might wonder why we need a Facebook clone when we have, you know, Facebook. I asked myself that back when Google released its own Internet Messaging utility. We had MSN, Yahoo, and Skype. I need another IM client running on my desktop like I need a hole in my head.

Today, however, I use it quite regularly. How'd that happen? Google had the sense to kind of, oh, force it on you. Google included a little web version of their IM in their gmail page. And they also tied it to who you were emailing. If you exchanged several emails with another gmail user, that gmail user was automatically added to your IM chat list. It sort of greased the rails of communication between people you might not have on your other IM clients and people you might not expressly add. But there they are. That little green "online" light tempting you to message them…

Eventually you built up a critical mass of IM contacts and Google Chat just became part of your regular stable of apps.

Google+ seems to be angling towards a similar strategy. It's available off your gmail menu bar. It's got your name up there. In bold. With a plus in front of it. It's begging you to click it.

When you access Google+ you get a very familiar Facebook look and feel. There's a center pane with your news feed. The left pane gives you certain controls. The right pane gives you a variety of ways to interact with current "friends" and find new friends.

Bringing Sanity to the Friends Concept

What I believe made Facebook popular was its initial implementation that made it a social network you felt safe letting your mother join. Facebook's security was tight in its original implementation: If you weren't a friend you didn't get to see anything. Myspace had become a free fire zone and Facebook seemed like a place where you could comfortably use your real name and make available personal data. Google didn't crawl it. No one could see your photos and information unless you specifically invited them as friends.

Facebook over the years loosened up these restrictions. They were still there, of course, but Facebook did a poor job of letting you know default settings were now a lot looser. Trying to figure out how to tighten up your security was frustrating exercise of drilling down various menu items and checking various check boxes with poorly documented labels.

Google+ starts you off with Facebook security settings of old. The drive-by user can't see much. The whole traditional "friends" concept of Facebook (plus its Myspace and Friendster antecedents) is more granular under Google+. Everyone does not get lumped in as a friend. You have circles: friends, family, and acquaintances (plus a more distantly related "following"). The acquaintances circle I appreciate. Social networking has diluted the meaning of friend. Google+ provides you with an alternative. A lot of the people we have relationships with online are better thought of as acquaintances.

These circles aren't just a matter of semantics, however. Circles can be used to control access to your information and media. It's done in an obvious drag 'n' drop way, making it very easy to figure out. No more menu and checkbox hunting like Facebook. 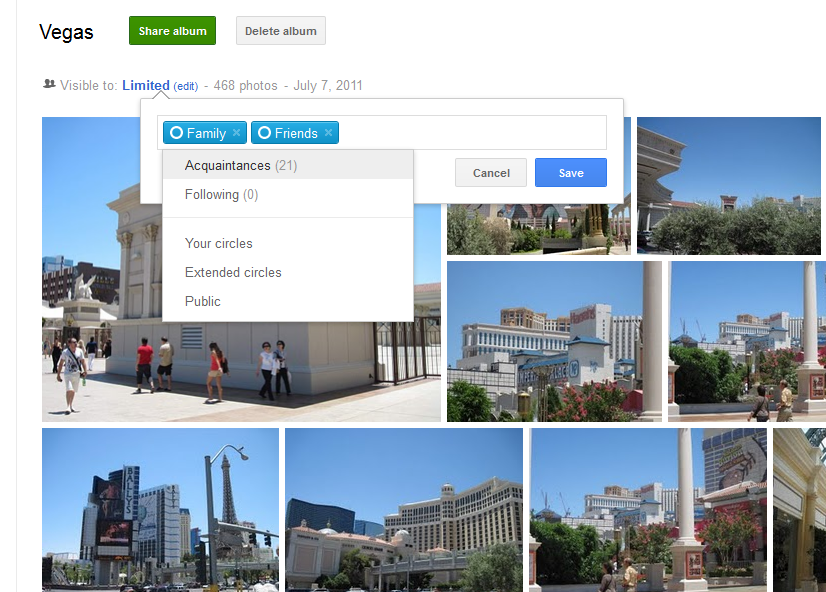 One thing I never liked about Facebook is its photo album. It scales down photos to a size better suited for the 14" monitor days. Flickr has the best implementation, preserving the full uploaded size but presents various scaled down versions. Google+ scales the photos down too but presents them about 25% larger than Facebook. You can get more detail and the image fills larger monitors more naturally. Google+'s photo albums present in a both a gallery and slideshow format. You can mix still images and video. Facebook puts videos on their own page. 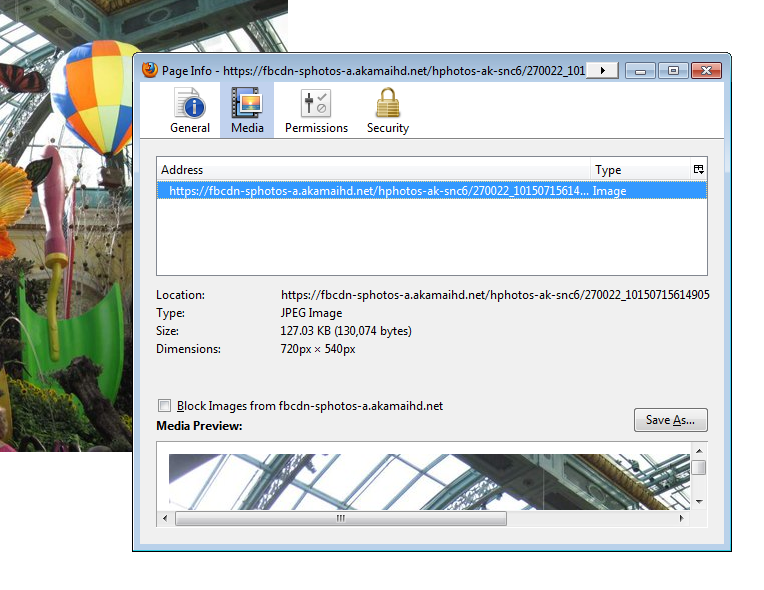 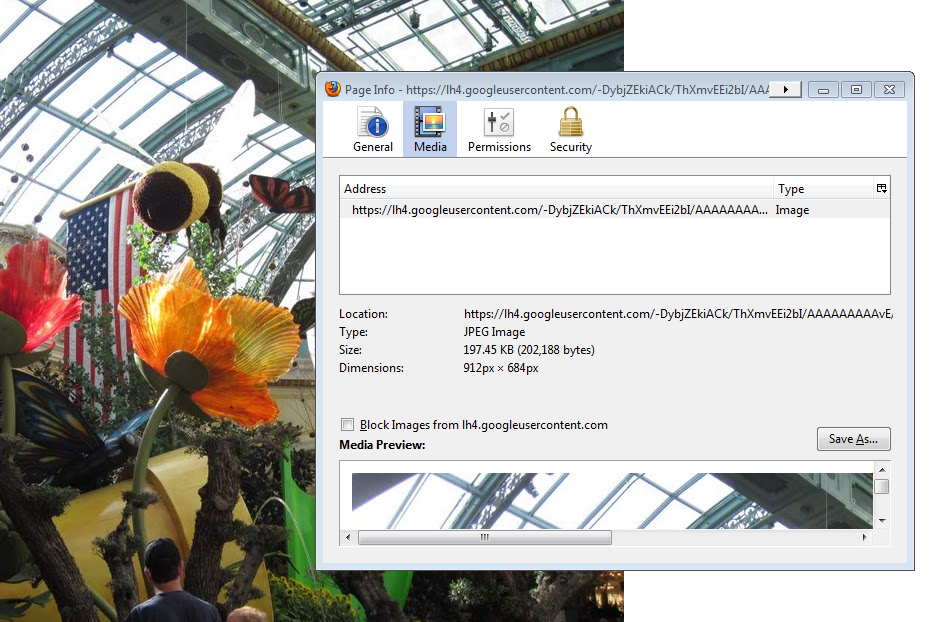 Same photo, Google+ scales a photo down to a maximum width of 912 px

The Google+ photo album did confuse me a bit. It's not obvious how to delete photos added to an album. In the gallery view there are no option. You can to go to the slide show view to get editing options. There is also no option for editing the name of the album after you've created it. 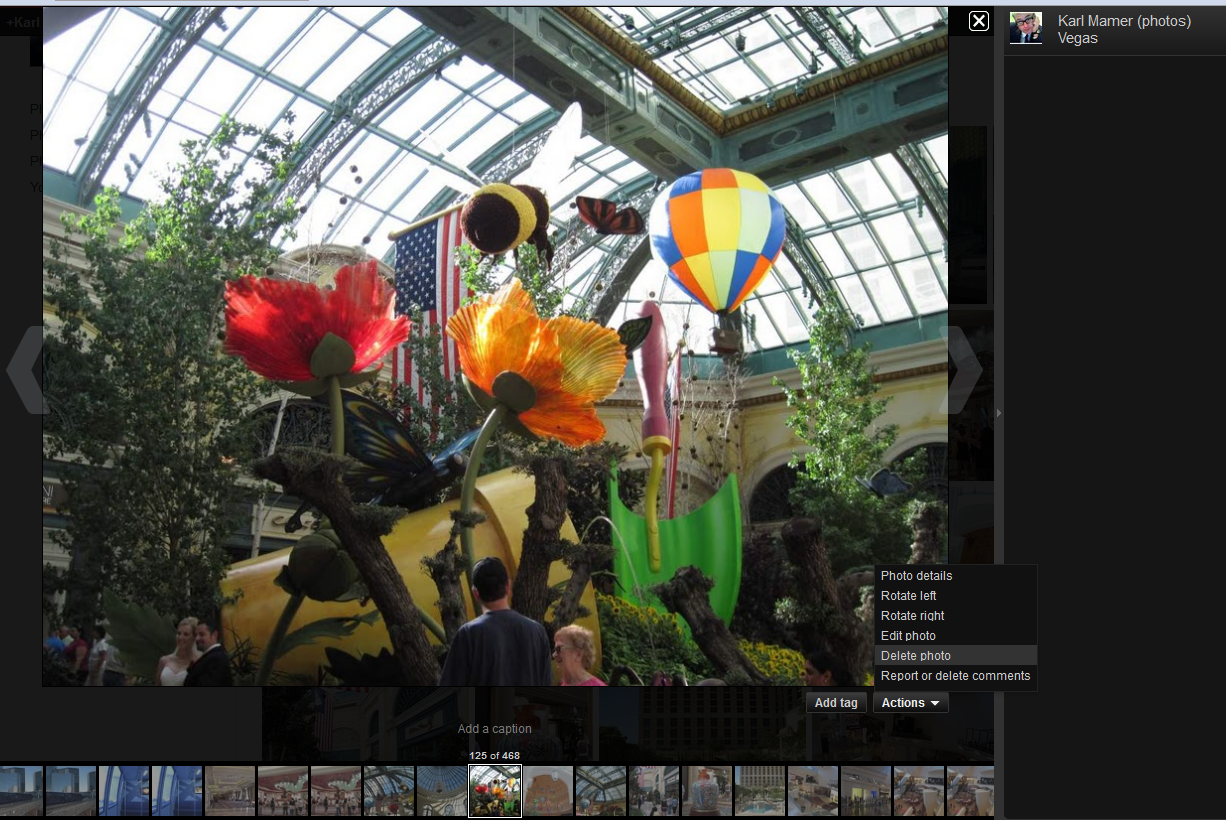 A big thing to look out for is the Also email option being turned on just before you tell Google+ to post the album. No doubt in your initial stages you'll be testing Google+. You don't want to email blast everyone in your gmail address book with your test album. 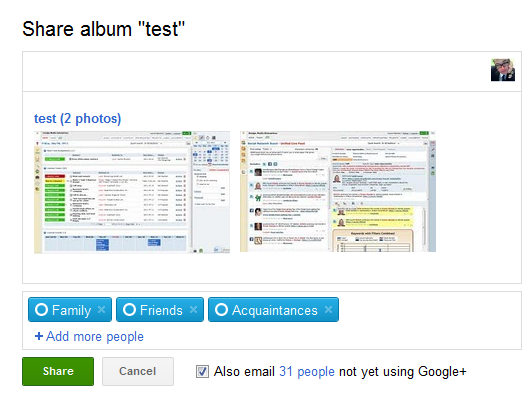 The problem with Facebook is it's not a great platform for lead generation. Lots of businesses are there because their customers and potential customers are there. But leads have to come to you. They have to find your "fan" page. And since there's no company accounts you can create on Facebook, you have to engage them via your personal Facebook profile. You have to treat customers like friends, giving them access to the baby shower photos, your beach outing photos, and whatever drama might play itself out on your wall.

Google+, on the other hand, lets you wall off your personal life. Also, Google has made it known every Google employee's bonus will be tied to the success of Google+. So you can bet Google+ is going to be showing up in Google docs, Google calendar, search, Android devices, etc. Since Google's various properties already have a strong following among small business users, Google+ is probably going to be adopted osmosis like by small business users. You won't have to work too hard to find them and attract them.