Seven Predictions for Social Networking in 2012

Google Plus started with a bang and closed out 2011 with a huge whimper. Arguably it closed out the month of its launch with a whimper. That might be some kind of record. Google, however, is not going to abandon the social networking platform. It's going to stay in the game or else it would just have to recreate Google Plus next time around. Remember, Google controls the Android OS. I don't think we're too far from a world where your phone is your PC. You will dock your phone to your desk at work and use that for all your work. You will undock it when you go home and use it as your home PC, entertainment center, and, of course, phone. If Android continues to be the dominant operating system in the tablet and phone market, Android will be the OS of the future. Google can simply build Google Plus right into the desktop.

I'm not saying we're ditching Facebook for Google Plus by December 2012. I'm not going all Mayan on you Facebook fans. I'm just saying Google is going to be keeping the Plus on life support well beyond then. 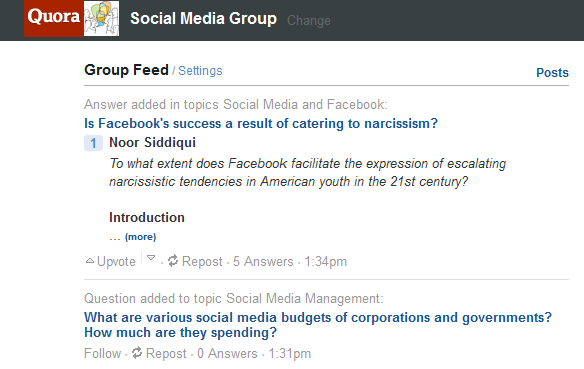 LinkedIn began life in 2003, just as social networking started to gel in people's minds as something different, a category unto itself. Its attempts to become more of a social network (versus a kind of monster.com with a Bacon number) have always felt like a kludge. One of the best places to really interact with other LinkedIn users is LinkedIn Answers. The "wisdom of the crowds" concept had been tried by Yahoo and Google but it largely failed as, well, there was no way to filter out total idiots. LinkedIn Answers, on the other hand, had a self filtering mechanism. Will I embarrass myself and my company? Alas, the LinkedIn Answers system isn't very user friendly. You can't really edit your answers after the fact.

Quora, on the other hand, had what I like to call "the second mover advantage". In the online world, sometimes it's better to let others pioneer the idea, make the mistakes, and then you distill what is successful. Quora is a question-and-answer website that also adds a kind of Wikipedia like element. Users can not only edit their answers but can edit yours. The interface is friendly. Quora intuitively puts questions in front of you you might be up to answering. And because it's real names and people want to maintain a professional reputation, the idiot ratio is low.

I think if Quora can add some of LinkedIn's pluses, notably job hunting ("Hey, we worked together in 1994! Help me get a job! Since we've all moved to toner cartridges, I no longer have that copier fluid huffing problem..."), it can make LinkedIn the next Myspace.

In 2006, you couldn't rightly call yourself a social media guru unless you had a podcast. Unfortunately, this wonderful niche media never really caught on with the business world. It should have. If business success is about creating one-to-one personal relationships, podcasts are a way to get a company's voice and personality inside a customer's head. Listners can't help but form oddly one-sided personal relationships with the hosts. These are your friends who accompany you on a long flight or daily commute. They're your workout buddies. I'm starting to notice that many of my favorite podcasts are starting to go from weekly formats to "weakly" formats. They come out on a "oh whenever" schedule. 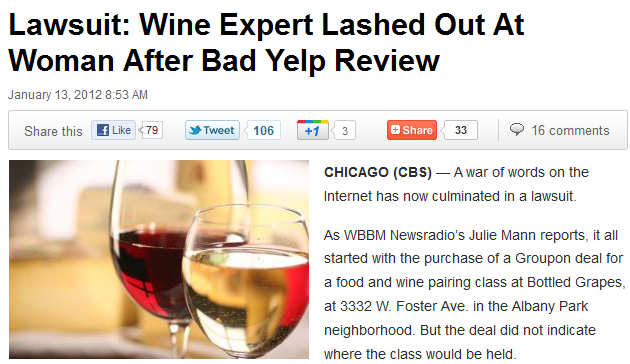 Some of the big scandal stories these days in social networking are merchants butting heads with consumers who use the Yelp review site. The scenario typically plays out like this: Customer writes a bad review. Merchant notices and instead of putting the review in perspective or context, the merchant decides to cyber stalk the customer. Ouch.

We knew it when businesses started giving us customer.service@megacorp.com emails that complaint emails were going to be ignored. Because of such inattention, consumers are increasingly turning to review sites like Yelp and Tripadvisor to air their beefs (and kudos!). After unloading into the diaper, they're finding a community of like-minded users. And notably on Yelp, they're also finding a high concentration of engaging, single, attractive, and aspirational twenty-somethings keen on getting together in, get this, THE REAL WORLD. Curiously, Yelp works best less time you spend on it and more time out in the real world. It's Facebook for people with demonstrably active lives.

Four Square, Yelp, Google, and Facebook already employ your phone's GPS feature for checkins. You're no one if you're not a mayor or duke of your local Starbucks or Pinkberry. People take notice of this stuff. Well, actually no one really takes notice except for the two or three people competing for the local dukedom. And these things can get nasty. Believe you me. I wish I could say I'm not talking from personal experience. Oddly, the person who seems to take the least notice is the establishment owner. He or she might be entirely unaware a stabbing is about to take place in his/her establishment because Tony R has lost his dukedom to Judy M. Merchants are going to increasingly learn to pay attention to these competitions taking place in cyberspace and monetize them in meatspace.

Checkins, as described above, are the first successful marrying of social networks, mobile devices, and built-in GPS. But it has great potential for bringing strangers with aligned goals together, making them aware they're in physical proximity and presenting an easy ice breaker. I can't say what that next big app is going to be. But by the end of 2012 we're going to see apps starting to take advantage of onboard GPS. Dating sites might be obvious ones but then again I think women aren't going to want to broadcast their movements to many of the creepy guys found on such sites. I'd hazard a guess we'll see casual cellphone games using GPS to create some real life social MMOG. It better not be Mafia Wars. I don't need people going Fruit Ninja in my local Pinkberry.

Yes, this is the equivalent of a psychic predicting an earthquake on the west coast. Facebook will change its interface or its privacy policy or give advertisers and social gaming app companies more peaks at your private information. People are going to be outraged. Outraged! And then get used to the new normal and forget what they were upset about.

I'm still not a big fan of Facebook. I simply can't call it user friendly by any streatch of the imagination. If a company doesn't care about my convience...screw'em.

You're 'right-on' with the comment about the 'dukes' of FourSquare. Real business owners and people with real businesses to run could care less about that crap...a bunch of supposed adults playing "dungeons and dragons".

On the 'review sites' issue....somebody will start scam that system eventually too. Just like people have been scamming that worthless BBB for years.

Bottem line...the majority of these new platforms are ultimately ways for their owners to make money...screw the customer! Meanwhile, business owners who stick to the basics (Be Real, Give Good Service, Do What They Say They'll Do..)...they make money and retire early.