We do like metrics. It's a complicated world and we need ways to synthesize the flood of stimulation and data into a neat little bundle: Height, weight, our HDL vs LDL, Neilson ratings, the Dow, the price of gas, the GDP, the unemployment rate, the prime interest rate, our golf handicap...

As these numbers rise and fall, so does our mood. Many metrics are, at best, an indirect measure of what we're most concerned about. The unemployment rate does not truly reflect the number of people who gave up working and the under employed. The Dow Jones is a very poor measure of the health of the economy. The GDP can be gamed by the government building a bunch of airports or aircraft carriers no one is actually going to use in an economically productive way.

A metric can still be useful even if it lacks a one-to-one correspondence with the reality it tries to represent. The unemployment rate if simply taken as a relative measure is still a good barometer for the health of the economy: 5 is good and 10 is bad.

It comes as no surprise that companies are trying to bring metrics to the world of Social Networking. Like the real world, Social Networking offers a flood of data. It's very hard for us to understand our relationship to the networks. Are things good? Are things bad? Am I being heard? Am I having any influence? 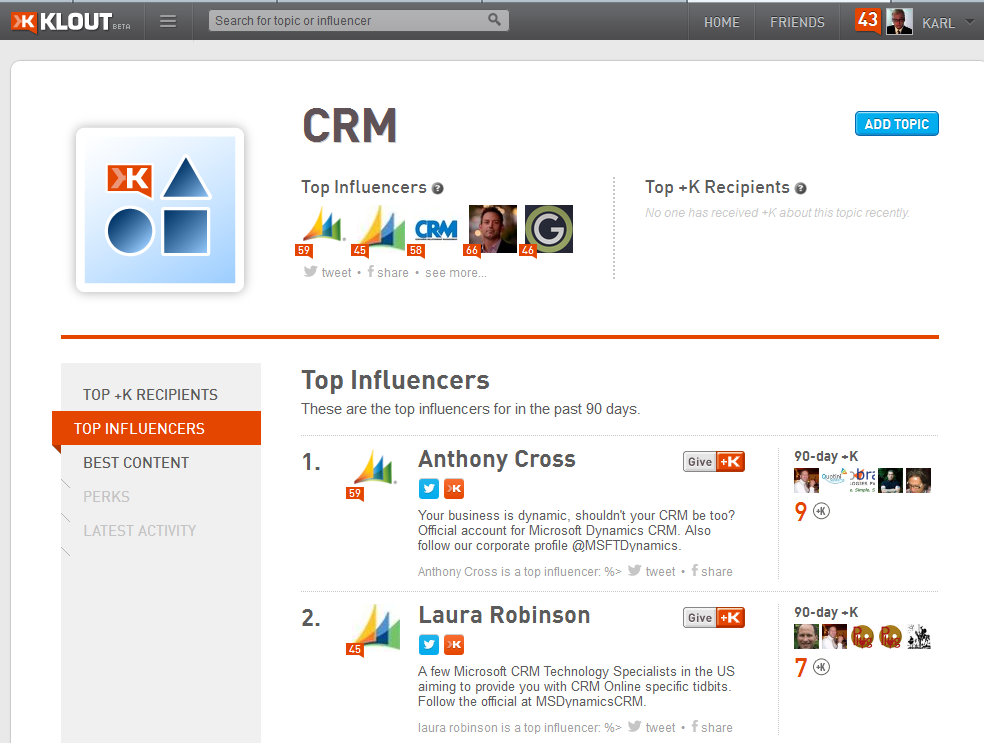 Does Klout have Clout?

Enter Klout. Klout sifts through the vast Twitterverse and using a super secret metric tries to determine your influence. Influence is represented via your "Klout Score". Higher the score, more influence you supposedly have. Klout claims to use more than 400 different "signals" but will not reveal the exact nature of their secret recipe. Klout does reveal the biggies like Retweets, Mentions, List Memberships, Followers, and Replies.

As we discussed in Part 1, the research (albeit limited) suggests the number of followers you have has little relevance on influence. Although it seems to defy common sense at first blush, it makes sense when you think about it. Many people follow you simply to be polite. You followed them, after all. That says nothing about if they even read your words. The research also indicates replying to and engaging with your followers has a lot to do with influence. Therefore it's nice to see Klout considers replying a key metric.

A much overlooked facet of Twitter is the List concept. People can subdivide who they follow into lists, arranged under different topics like "Foodies", "Movie Reviewers", "Family", "Comedy", etc. I guess the thinking goes if people are adding you to lists, you might be influential regarding topics related to lists.

Another interesting thing about Klout is it's not an opt-in system. Klout scrapes the Twitter feed and builds out Klout scores for all users. You can find your Klout score by joining the site. I suppose it's nice you don't have to join and then wait months before you get a true metric, assuming Klout actually measures something.

A Measure of What Exactly?

But does Klout really measure influence? The safest thing, I think, we can say about influence metrics like Klout is to think of them less as a measure of influence and more as a measure of influence capacity. You might be thinking at this moment "what? Isn't that the same thing?" No. There's an important distinction. Person X has a Klout of 70. Person Y has a Klout of 35. Is Person X twice as likely to be successful in their campaign of influence? If you hold that Klout is a measure then you would say "yes". If you hold Klout is a measure of capacity then you would say no. In terms of capacity think of it this way: should the thousands of mysterious never-to-be-repeated-again ducks all align and Person X and Person Y's tweets manage to exert influence, Person X (70) can reach twice as many people as Person Y (35) or Person X's influence can penetrate twice as far into the network as Person Y or the quality of the objective outcomes would be twice that.

Simply put, Person X and Y are equally as likely to get anyone in their social networks to listen to what they have to say. But if a tweet has the mojo, Person X (70) reaches more and deeper.

The problem with putting too much stock in Klout and other influence rating systems is the desire to game the system. We figure out what it takes to get a higher Klout rating and we just do more of that. Many would counter argue and say "well, don't we do a lot to game Google's Page Rank metric via various SEO techniques?" True. But Page Rank has a direct, measurable effect on where your web page appears in search results, which in turn has a measurable effect on sales/conversions. Increasing your Klout score can have no effect, theoretically.

I say theoretically because Klout can become a self-fulfilling prophesy. We're starting to see people with high scores get "perks". These can be real perks like an airline decides it wants supposedly influential tweeters to deign its latest direct flight the greatest thing since the lie-flat bed. So, the airline awards free flights to tweeters deemed influential regarding air travel. Klout is starting to monetize its data by letting merchants offer Groupon-like deals to Klout users based on metrics.

The danger here is a kind of unproductive rent-seeking. Employees waste a great deal of time trying boost their Klout scores, begging friends to retweet/mention them, instead of doing the work that raises Klout scores both organically and coincidently.

That said, if Klout becomes the gold standard, gaming your Klout might get you in the fabled journalist "Golden Rolodex". Journalists can be lazy. I can see a day when they might go "who is the expert on X?", go to Klout, and find the most hypothetically influential user on a topic.

Twitter and Facebook themselves have worked hard to add their own clout/relevance elements. At the top of your Facebook News Feed is a Sort feature. You can sort by Most Recent and Top Stories. I think most any sane person on Facebook (not an oxymoron?) keeps sorting by Most Recent. You always want to know what your friends are up to. I don't care to let Facebook decide who of my friends is truly popular and bury, I dunno, a birth announcement of a new niece. Luckily Facebook remembers this setting and you rarely have to set it to Most Recent. The cynic in me guesses this Top Stories feature was created by Facebook to create a secondary SEO industry, much like how Google has created such an industry with its search results. "The secrets of getting to the top of a feature no one uses!" 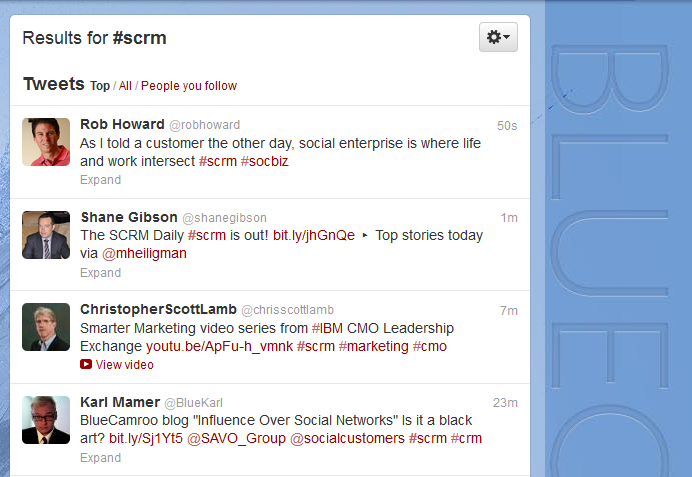 The Twitter implementation of Top Stories is either a little more irritating or a little more useful depending on your frame of mind. When you view a # channel like #scrm via Twitter, Twitter first dumps you into the Top Tweets view. Tweets are not in any kind of chronological order. Just some order Twitter determines which tweets are top, toppy, and toppiest.

Like Klout, Twitter does not reveal the secret recipe to determining toppiest. And Twitter seems to claim top results are personalized. What's tops for me might not be tops for you. That adds a new twist to any SEO-type attempts. But an educated guess is Top Stories is largely driven by how many times you're posting in a channel (like #scrm), how many people are retweeting your channel posts, etc.