Google Plus: A second look 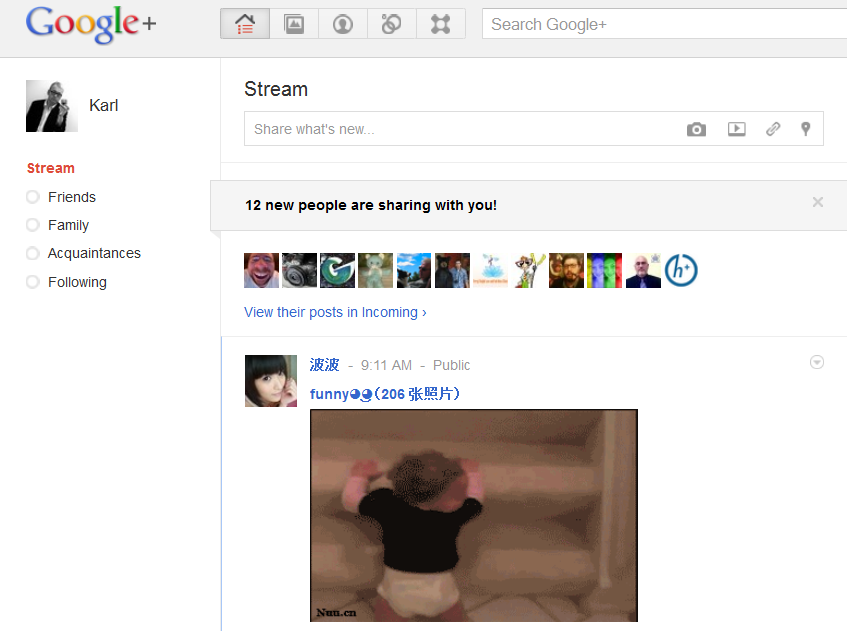 Golly. Another Google Plus user posting an animated GIF.

So Google has opened Google Plus to the uninvited masses.

Back in July the Roo Blog took a first look at Google Plus. What we found was an impressive collection of features that, compared to Facebook, made it a more compelling and logical place for business. The circles feature was a particularly useful expedient for keeping work/social life aspects firmly and easily separated. One of Facebook's great weaknesses, and a reason it's not been adopted for business like Twitter, is it is very hard to create a firm separation between your personal profile and your professional profile.

Since July, Google Plus seems to be stuck in neutral. There was a mad rush for invites. People spent a lot of time setting up Google Plus, adding anyone -- everyone -- to their circles, and then. Well. A lot of nothing. Even Larry Page's Google Plus (as of this writing) hasn't been updated in more than a month.

A few cracks started to appear early. The adoption rate by males was way out of balance. Google Plus is more than 60% male and less than 40% female. Google was over zealous in policing its real name policy. Sure, Facebook uses real names. But Facebook doesn't seem to care if you make up a Bart Simpsonesque prank name like Amanda Hugenkiss, Al Coholic, Jacques Strap, Hugh Jass, and so on. Google ran bots and shut down Google Plus accounts that were using obvious pseudonyms. When confronted about this policy, Google seemed to take a "my way or the highway" approach. They offered little sympathy. The problem is many women are uncomfortable with using their real names (for reasons sadly too obvious). This sunk the male/female ratio even lower.

Hey, everyone likes to goof around on social media but no one likes to duplicate efforts. Facebook, Twitter, LinkedIn, Youtube, etc. all fall under the banner of social networking/social media sites but each provides a very different use and provide some kind of cross connectivity. If I post a video on Youtube or upload images to Flickr, I can have these sites announce it on Facebook or Twitter. My Facebook wall posts can go to Twitter. My tweets can go to my wall. But many asked, after setting up Google Plus, "wait, it's already on Facebook? Do I want to copy and paste it on Google Plus? If people are following me on both, don't I just look like I'm repeating myself?"

Who are these people?

Many people wanted numbers quickly on Google Plus. They started adding everybody. People reciprocated. The only people producing wall content ended up being, it seems, shut-ins and LOLCat fans. My wall was polluted by a never ending scroll of people who seemed to post a new animated LOLCat image every 15 seconds. I could waste time cleaning up my circle list. (How do I do that?) Or I could just ignore Google Plus altogether.

Should I give up on Google Plus?

In short, no. It's only been a couple months. The laser, the amazingly useful laser, was initially described as "a solution looking for a problem". As unbelievable as it sounds, when the laser was initially invented, people weren't sure what they could do with them other than stage cool Pink Floyd shows in planetariums. Things can take time to catch on.

Facebook is still a pretty lousy place for business. If there's one thing Google knows, it's how to make online apps that can become indispensable to modern businesses. Don't judge Google Plus by its initial release. Remember, Microsoft Word 1.0 was laughably bad. The WordPerfect people didn't think they had anything at all to worry about.

My take on Google Plus is "wait and see". I've got my account. I use my acquaintances circle to add non-real friends (yes, modern society has reached a point where we have to think in terms of "is he/she a non-real friend?"). My acquaintances circle numbers are about double the number of people I consider real friends. I post BlueCamroo-related content. I poke around and see how other people are using Google Plus. Most importantly, one needs to keep in mind Google is the company that controls the world's most  popular mobile platform operating system. If you're using Android, you know how expedient a gmail profile is. I'm still betting Google will make Google Plus the architecture that girds its complete suite of offerings.