There is no push-button marketing on the social web

Okay what's wrong with this picture? It probably took you a quarter of a second to figure it out. My tweet was humor. A tweet in keeping with a twitter meme that was popular on that day. The responder was clearly a script, looking for certain keywords and then offering me a service. No care was given by a real human to ensure my tweet was actually some kind of request. At best, these kind of random "drive by" tweets are ignored. Worse, someone might retweet the merchant's amusing "swing and a miss" and make the business seem somewhat clueless about the social web. At worse, it could actually lose a customer before even making one. "Geez, if they're so clueless..."

On the flip side, here's an example of how a business (or I guess an entire nation) interacted with me right on Twitter:

The VisitNorway people were scanning for key terms like Oslo and Norway or monitoring the related channels. It's clear the VisitNorway people read my message and tailored their response to me. There was no hard sell. It's easy for me to simply click back to their Twitter and follow the profile URL back to any tourist information. If I was truly on the fence, this simple, simple interaction might be all that it takes to tilt me in the direction of Norway. Glaringly, Sweden never got back to me. Too into yourself, Sweden? Huh? 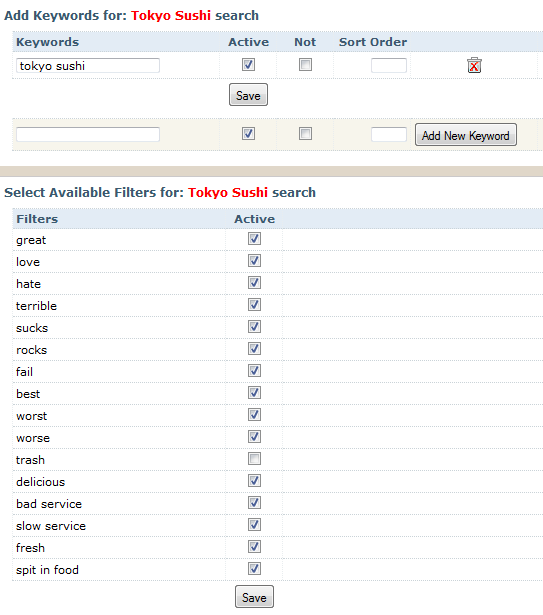 Set up a search in Social Network Scout with filters and keywords.

BlueCamroo's Social Network Scout's channel searches gives you the ability to have a VisitNorway type omniscience however we have wisely not given you an ability to auto respond. 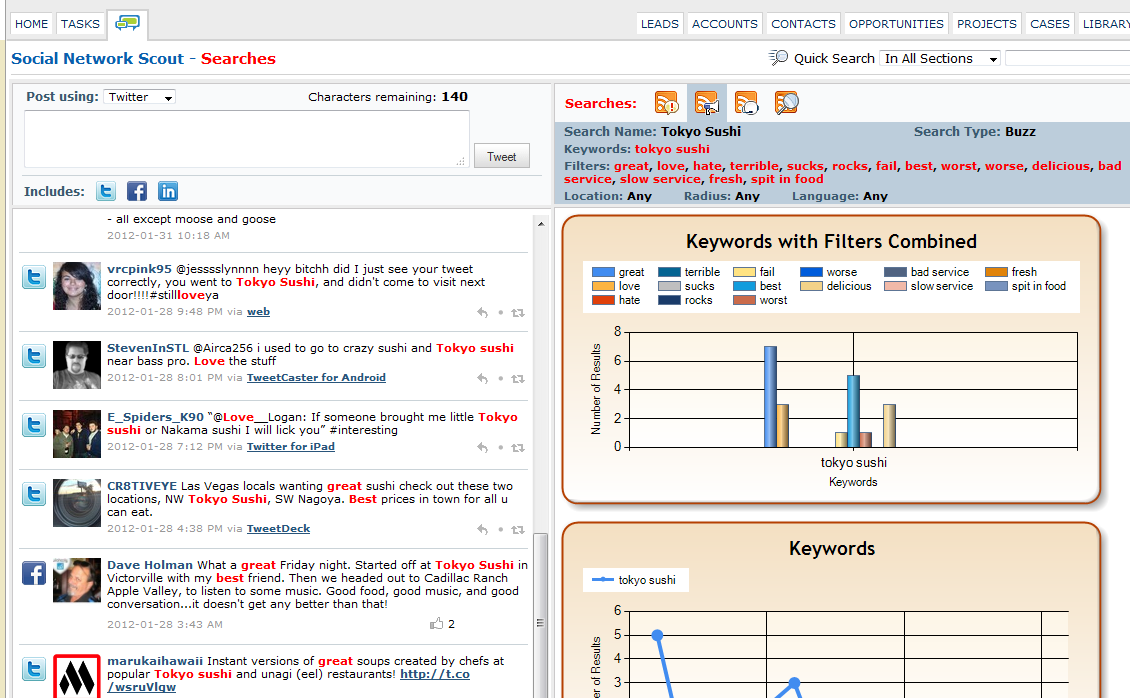 Run your search and view hits.

English is too nuanced to create a failsafe script that eliminates all false positive hits. When you find a hit, work from a collection of sure-fire pitches but tailor the message.

I've spoken before about how scripts don't work on Twitter. Scripts that send out a canned "thanks for the follow… now visit my web site" message don't really work and just risk irritating the user. More odious are scripts that actually post a public message when you unfollow an account. Is unfollowing a Twitter account so in violation of social graces that one needs to be named and shamed?

There are a lot of spammers out there that scan Wordpress and Blogger blogs for certain key terms and then post some canned response, I guess hoping one or two of their comments will seem on topic.

One of the "cutest" attempts to get around this was on the business review site Yelp. Yelp is plagued by people who create an account, give their business 5 stars, and then never visit the site again. Fortunately, Yelp has its own script that cleans up these drive-by reviews and they don't last long before being hidden from view. 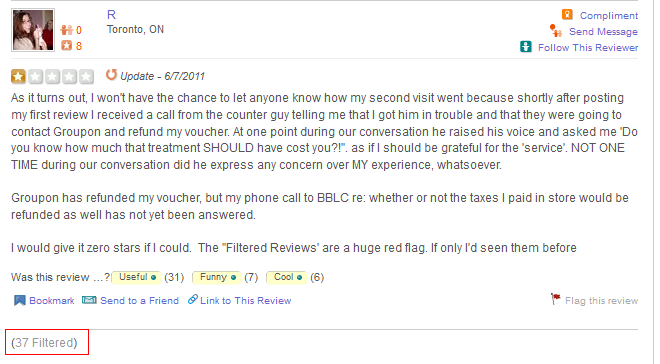 Owner created up to 37 fake accounts. All caught by a spam script. Owner could have spent 1/10th the time simply making things right with a handful of ill served customers.

One business owner was smarting from a Groupon-type deal gone wrong. His beauty clinic was inundated by voucher holders and service suffered. A few disgruntled Yelp users pilloried the business with 1 star reviews. The business owner tried what every other merchant is tempted to do, create a bunch of fake accounts and post five star reviews to counter the bad reviews. The owner quickly discovered the power of the all-knowing Yelp spam script.

Instead of doing what he should have done, contacted each of the dissatisfied reviewers, and asked them how he could make things right (Yelp does let reviewers edit and revise), he worked hard to try and defeat Yelp's anti-spam script. He reasoned if a user looked like a real user, Yelp wouldn't delete the review. He tried to create two or three seemingly real users. He reasoned before using these fake accounts to vote up his salon, he would do everything to make them appear like real users. That is:

1) Have a history of good reviews

2) Friended others on the system

3) Complimented other users and interacted with them

He also reasoned to successfully create fake accounts, the reviews had to sound real and had to be substantive. That's hard. That's a lot of work. A light bulb went off in his brain. "What if I just copy restaurant reviews from other cities by other users and then use that text as the basis for reviews of restaurants in my city?"

The business owner quickly built up fake accounts with dozens and dozens of reviews, all sounding organic because, well, they were. Alas, the business owner was only half as clever as he thought he was. He didn't consider other Yelp users notice the work of other users. He also forgot the time dimension. Every review has a date stamp. He posted 80 or so reviews in the space of two days. Who can possibly write 80 high quality reviews over 48 hours? It was quite easy to google on the user's reviews and find they were taken from Yelp users in other cities. He also forgot to scan the reviews for comments like "has a great view of Rockefeller Center", "just off the Vegas strip", "great ocean side patio".

While comical, some of his reviews had the potential to damage the businesses they were posted under. While even the classic "moron in a hurry" might grasp there's something fishy about a review about a patio overlooking the Pacific ocean when the city is landlocked, many of the reviews had less obvious mismatches. What happens when a patron shows up expecting romantic candle light and finds something very different? This may negatively impact the patron's experience at the restaurant, through no fault of the actual owner.

The upshot is, the business owner, in a quest to counter his own customer service fowl up, tread dangerously close to committing actionable business interference.

To Yelp's credit, it quickly cleaned up this mess. The business owner only managed to waste his own time. He could have rectified it by spending considerably less time addressing the specific complaints of a small number of people. Instead, he turned into a much large horror show.