It started with a satire in The Onion that North Korea's Kim Jong-Un was named the Sexiest Man Alive. And it ended with a Chinese English news source reporting the story as real news. This is, of course, not the first time an Onion article got into the Asian news and was reported as actual news.

It leaves some people assuming maybe satire is a poorly understood Western concept. Certainly humor is one of the hardest things to translate between languages and cultures. But this has less to do with a problem of translating satire and more of a problem with the way people fail to distinguish genuine news and news sources.

Back on November 19, 2012 a Korean English paper called The Korea Times ran a story about The Onion article on Kim Jong Un. The Korea Times appears to some to be an English language paper for ex-pats in Korea but its readership is largely Koreans who want to practice English. A particularly effective and inexpensive way to acquire new vocabulary and practice your reading skills is reading papers in the language you wish to study. 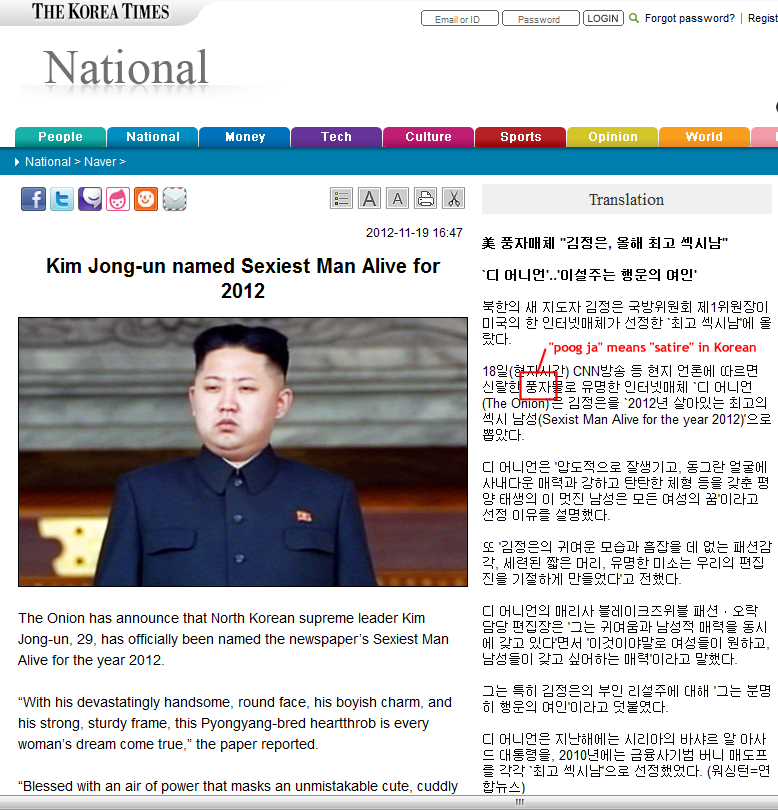 To aid English studiers in South Korea, The Korea Times provides the English copy and then a Korean translation. In The Korea Times version of the The Onion article the Korean translation pointed out it was a work of satire. But there was no mention of this in the English version of the story. Clearly Koreans would read the Korean copy and understand this was satire.

However, The Korea Times editors probably failed to grasp other Asian news sources that provide news in English grab copy from other English-language papers in Asia. Naturally, the Chinese don't have many Korean language readers on staff but, because English is a lingua franca, saw the English copy and ran with it. Much to humorous effects.

Back on this side of the world

Lest my readers think I'm being smug, just remember, we're as easily fooled. Back in August 2011 I wrote about a news item that was getting repeated a lot about IE users being less intelligent. It's probably a good time to review some of the "defense against the black news arts" techniques I covered in that article.

Actually, some of that could have come in handy a few days ago when many people were frenetically posting some "pseudolaw" word salad to their Facebook timeline thinking this will cause Facebook's legal team to have utter fits about implementing some future changes to its privacy policy. The urban legend debunking site Snopes has a good analysis of why posting a Harry Potter spell on your timeline has as much effect as that privacy statement meme.