Nielsen has released an interesting document called the Social Media Report 2012. Nielsen is, famously, the TV ratings company. TV screens are no longer those wood-encased boxes we keep in our living rooms or dens. We carry a TV screen with us everywhere we go these days via tablets, laptops, and smart phones. Nielsen has, wisely, followed the evolution and expanded its metric scope to things like social media. 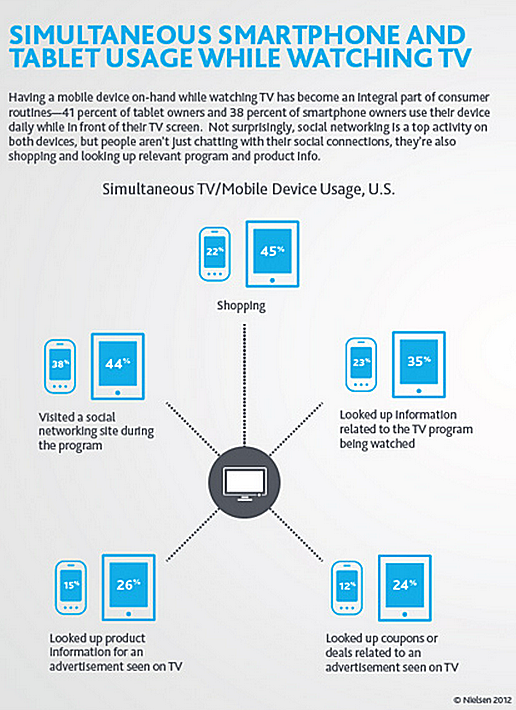 There are some interesting findings: People really are still watching TV.

But they're sitting in front of their TVs with a tablet. What are they doing with their tablets? They're tweeting about the TV show they're watching. They're researching advertiser claims. And they're researching the show itself. Let's face it, there are a lot of TV shows these days that have season long story arcs: Breaking Bad, Homeland, Walking Dead, Game of Thrones. These are just some off the top of my head. Please do not send me flame mail if I forgot yours. I'm looking at you Fringe fans. Lots of these shows are highly detailed, have large casts, and complex story lines. People miss stuff. And they search out others to clue them in.

Now, gather round, children. I'm about to tell you about a time called the '70s and '80s. Back then every episode of every TV show had to be written in such a way that any viewer could drop into the show at any time during its season and immediately understand everything about the characters, the plot, and the back story by the first commercial break. No network would create a show that would require you to watch three seasons to understand why your coworkers around the water cooler were all in a tizzy the latest episode of Three's Company had a scene where Jack Tripper "took the black" and found a Valyrian steel sword on the body of a "white walker".

The Internet changed the dynamics. It's no coincidence a TV show like Babylon 5 could get on air in the late 1990s with a five year story arc and not, overly, concern network biz types. The fledgling web allowed users to research characters, past plots, and terminology.

Fast forward to today. We don't all congregate around the water cooler at work and talk about the show we watched on TV last night. There are way too many TV shows, shows we download, have on DVR, etc. Some people have decried this break up of social bonding that was engendered by a more limited viewing choice. However, that isolation was not long lived. People migrated to social networks to find like-minded and entirely reasonable individuals to bond over, not like that network guy so totally into Fringe you can talk no sense into him. Seriously.

So what does this all have to do, ultimately, with Social CRM?

The biggest mistake people make about trying to sell online is reasoning "people who want to buy X can be found in social groups devoted to X." Yes, you and 2,000 other merchants have thought about that. And you're all in that social group waiting for some potential customer to join. And then everyone pounces on the poor guy with their pitch.

Step back. Think about the time honored tradition of doing business on the golf course. People like to do business with people they know well. It's all about engagement. Not all of us are great golfers. Not all of us can be pundits or opinion leaders. But all of us are passionate about a couple different TV shows. And consider the efficiency social media engagement offers. You have to play golf at a set time. You are limited to the number of hours in a month you can engage on the golf course. You have to get schedules aligned. But engagement over social media can be done during down time. In an airport. On a bus. Waiting for your latte to be made.

One thing that's important, and I tried to drive home in my previous Roo blog about powering up your Twitter profile is all this engagement is for naught if people can't make sense out of your profile, and, in a glance, understand what business you're in and what you can do for them. Whatever your social platform, take a long, hard look at your profile page and see if it's presenting a clear message.